Central Asia, broadly defined as the region east of the Caspian Sea incorporating Kazakhstan, Uzbekistan, Turkmenistan, Tajikistan, and Kyrgyzstan, has emerged as one world’s fastest-growing regions since the late 1990s and has shown notable development potential. Among the region's advantages are its high-priced commodities (oil, gas, cotton, and gold), reasonable infrastructure and human capital, and a strategic location between Asia and Europe. Furthermore, Central Asian regions have already transitioned into market-oriented economic reforms to boost economic performance and private sector competitiveness. These key characteristics of countries have long been in the central interests of numerous developed countries to deepen economic relations and develop investment potential to expand trade turnover.

The total area of the countries of the Central Asian regions is more than 4 million square kilometers. The northern part is covered with Kazakhstan, which covers almost 68 percent of the entire territory. Kazakhstan bordered Russia from the north, and half of the western part stretches the Caspian Sea, from where it has direct sea access to Azerbaijan and Iran. 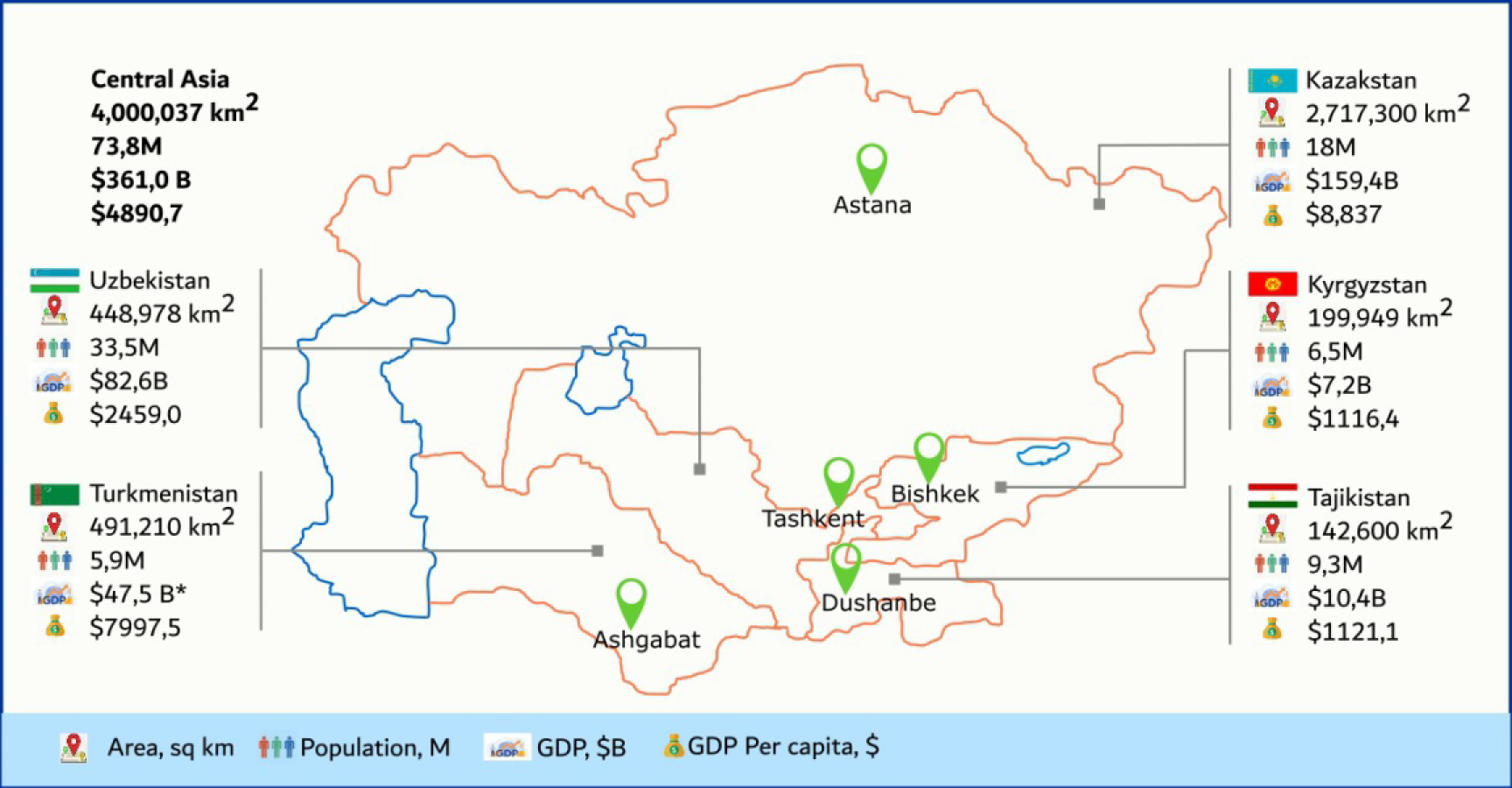 There is no international sea access in these regions. This is significant for a region comprising largely small landlocked economies with no access to the sea for trade. Thanks to the recent joint efforts of the governments of these countries, infrastructure is being developed and expanded to build alternative routes of international logistics corridors with access to the sea for closer countries bordering Central Asia, such as Russia, China, Afghanistan, and Pakistan.

Traditions, culture, and language in Central Asia are very similar and, in many ways, related. The Central Asian countries mostly share their religion of Islam. Strong respect for elders is also common in Central Asia. People also attach great importance to family and homeland. Under Soviet rule, people became dependent on sharing resources among family members, which meant that a strong extended family was valuable.

Most of the population speaks their native language: Kazakh, Uzbek, Kyrgyz, Tajik and Turkmen languages. The peculiarity is that these languages are considered as the ancient Turkish and partly Persian dialects. The influence of the previous Soviet Union is an important factor in the culture of Central Asia. Russian is spoken in all countries of Central Asia. After the collapse of the Soviet Union, these countries focused on independent development policies, developed international and diplomatic relations with almost all countries. Consequently, young people focused on the study of foreign languages. Therefore, among the younger generation of citizens, knowledge of the English language has become much more popular.