Uzbekistan is the first beneficiary of the UK Enhanced GSP Scheme 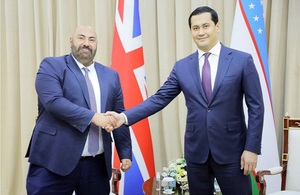 The event was organized by the British Embassy in Tashkent in partnership with Uzbekistan's Ministry of Investments and Foreign Trade. Kenan Poleo, Her Majesty's Trade Commissioner to Eastern Europe and Central Asia, who arrived in Uzbekistan on his first official visit, participated in the press conference along with Sardor Umurzakov, Deputy Prime Minister and Minister of Investment and Foreign Trade of Uzbekistan.

Uzbekistan was officially admitted to the UK's EF GSP on the 1st November 2021, after intense efforts by both governments to conclude the process in only six months. One of the factors in granting the beneficiary status of EF GSP was that Uzbekistan successfully ratified 27 fundamental international conventions in human rights, labor standards, the environment, and good governance. Uzbekistan has become the first country admitted to the scheme, which sends a hugely positive signal of intent from both countries to turbo boost the UK-Uzbekistan trading relationship, particularly now that there will be ZERO import duty on more than 7,800 products made in Uzbekistan.

The GSP provides Uzbekistan with access to the world's 5th largest economy and the most international consumer and retail market in the world, worth over £437 billion. The UK facilitates access to a fast-growing and developing market, which is a key hub to access the wider Region and Uzbekistan's unique textile, agricultural products, and many more.

In his statement at the press conference, Mr. Kenan Poleo noted: "The UK is committed to ensuring a growing and developing countries can use trade as an engine for poverty reduction. The GSP plays a hugely important role in this by providing preferential access to the UK's dynamic market. This, in turn, will support job creation and encourage entrepreneurship in Uzbekistan with its dynamic growing and youthful population."