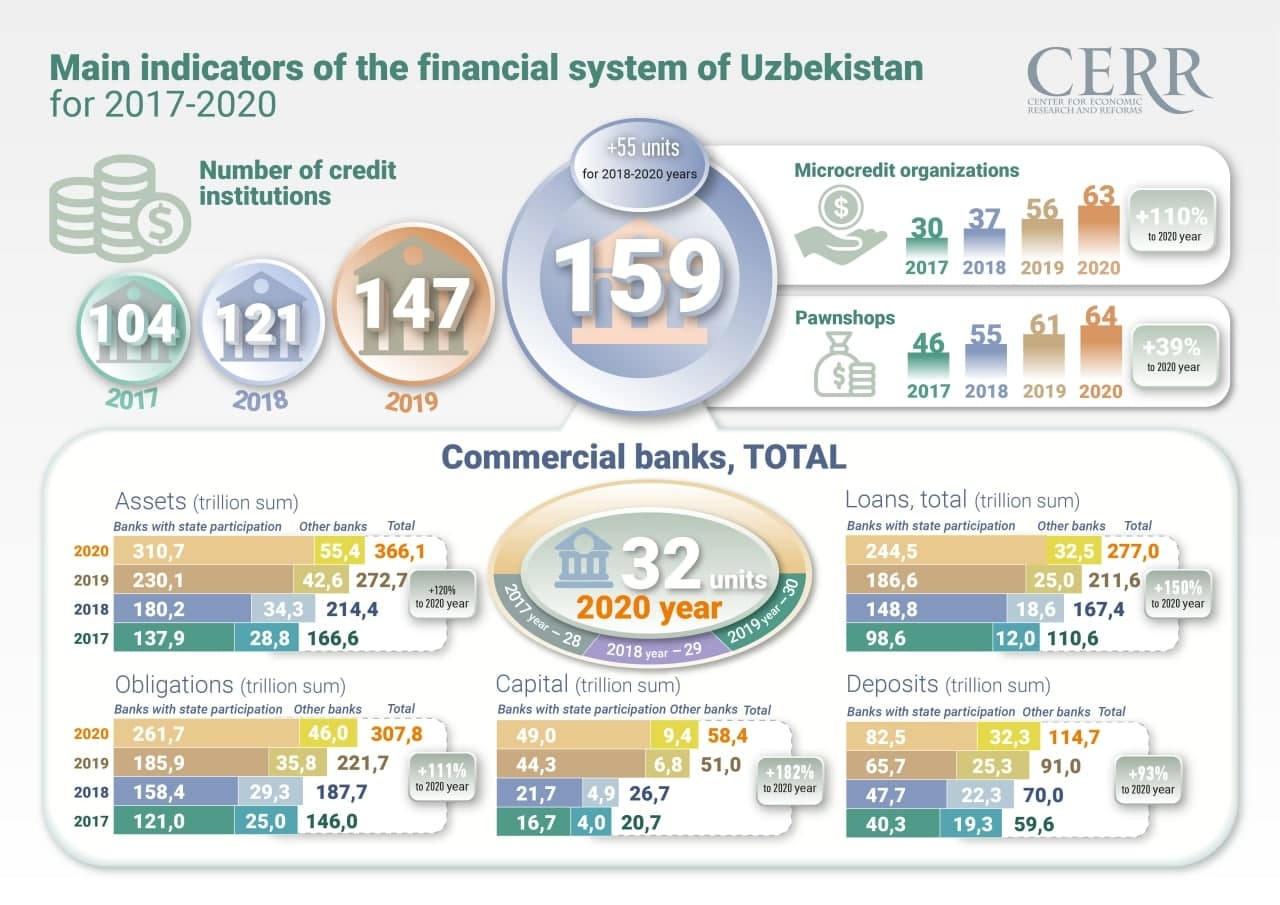 The banking sector of Uzbekistan has significantly shifted towards positive reforms in recent years. The main factors in positive changes in this sector are adopting adequate regulations and policies, including privatization of state shares in banks, the liberalization of monetary policy adopted in September 2017, and the free flows of the national currency. EU Reporter shares how Uzbekistan Financial and Banking sector dramatically changed over the past years.

The fundamental changes in this sector show that fifty-five new credit organizations appeared, including four commercial banks such as Poytakht Bank, Tenge Bank, TBC Bank, Anor Bank, thirty-three microcredit organizations, and eighteenth pawnshops. It is worth mentioning that the dynamics of this sector by various indicators at the end of 2020 have a significant increase compared to 2017.

The government of Uzbekistan successfully placed $1 billion of sovereign Eurobonds in February 2019, which also led several commercial banks to enter the international market for long-term capital placement. For example, Uzpromstroybank, the National Bank for Foreign Economic Relations, and Ipoteka Bank issued $300 million each at London Stock Exchange in Eurobonds in November 2019, October, and November 2020.

Thus, these actions caused the Uzbek Bank market sector to look into the interest of investors' foreign capital. Swiss company Response Ability Investments bought out a 7.66% stake in Hamkorbank in 2018.  Halyk Bank of Kazakhstan established a subsidiary of Tenge Bank in Tashkent in 2019. TBC Bank (Georgia) established an affiliation in Tashkent. Deutsche Investitions-und Entwicklungsgesellschaft mbH, DEG and Triodos Investment Management purchased the Ipak Yuli Bank’s of $25 million shares in 2020.

Although the positive trends in the banking sector of Uzbekistan have strengthened in recent years, the share of funds received from the government remains high in commercial banks with state assets. A high concentration characterizes the banking system of Uzbekistan.  Most bank assets still belong to banks with state shares 84% and five state-owned banks, namely National Bank, Asaka Bank, Promstroy Bank, Ipoteka Bank, and Agrobank, the state's share is 64%. The percentage of state-owned banks' deposits in loans is 32.9%, whereas private banks are about 96%. At the same time, the deposits of individuals amounted to only 24% of overall deposits in the bank sector, or it is 5% of GDP.

Therefore, the adoption of several regulations via the Presidential decree and the Government of Uzbekistan resolutions directed to address decreasing the role of state stakes in the bank's sector and enhancing the part of the private sector. Consequently, the effective regulation's goal is to increase private banks' total assets from 5% to 60 %, liabilities from 28 % to 70%, and loans from 0.35% to 4% during 2020-2025.

Under the Ministry of Finance of Uzbekistan established the Project Bureau to transform and privatize state-owned commercial banks. The organization has the right to engage international consultants and enter into agreements with international financial institutions and potential foreign investors. To support the privatization of Ipoteka Bank, IFC has allocated a loan of $35 million in 2020. The EBRD advises Uzpromstroybank on privatization, improvement of treasury operations, asset management. The bank has introduced underwriting, which allows conducting credit operations without the participation of employees.

In conclusion, it is worth noting the changes that have occurred under the influence of the pandemic in the banking sector of Uzbekistan. As in the rest of the world, the pandemic in Uzbekistan has stimulated the transformation of banks towards digitalization, the development of remote banking services, and the restructuring of customer service algorithms. As of January 1, 2021, the number of users of remote services amounted to 14.5 million (among them 13.7 million are individuals, 822 thousand are business entities), which is 30% more than in the same period last year. The issuance of licenses by the central bank for digital banks and branches has also contributed to the further digitization of the financial and banking system.